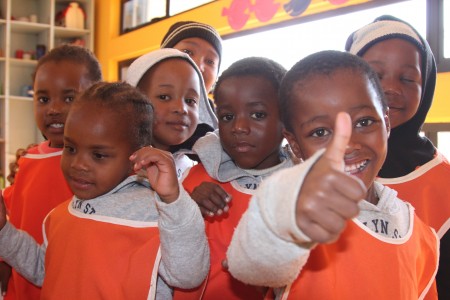 The next day, I was picked up by the lovely Nelisa, after my dad had left for his meeting at Philips half an hour before. Nelisa was a good driver and we managed to get to MO right on time, without getting lost ; ).

This morning, the delivery of books to the informal settlements was scheduled. These books had been collected by Alice, her friend and her children and came with many. Several boxes of books were put in the car and brought to the informal settlements (Kindergartens). Delivering these books and the toys, me and my dad the day before, was very rewarding as you could directly see the impact of it. Furthermore, we had the chance of meeting some amazing Gogo’s that were babysitting the children. I was told the Gogo’s receive trainings every Wednesday, varying in topics: from health care to women’s rights to (psychological) support. These Gogo's (a.k.a. African Grannies) strive to make every child in their colorful houses smile, smile towards a better future:)

Furthermore, on Friday I also have had the chance to interview one of the midwives. She told me about her work in the Philips Mother and Child-clinic, explaining that it was mainly for women (and their children) to check up during and after pregnancy. The room was rather small and the equipment available was limited, but … still tries her best to give everyone the personal attention and care that they need. She mentions that the main things she does are listening and educating people on how to manage and monitor their health themselves. This way, she strives to help not only her patients, but other members of the community as well. Being asked what she would want the clinic to look like, not having to worry about resources, she says she would like more (basic) equipment: oxygen tanks, a baby weighing scale, heart …, Sonars and first aid supplies. The main reason for this wish is that regularly, situations have arisen that require acute intervention. However, currently even the most urgent cases need to be transported to the clinic first, which is at least 20 minutes driving. For some, this has severe consequences.

In the afternoon, OBSA had arranged a Soweto Tour for my dad and me. Despite our initial hesitance to go, the tour guide Molefi made all our doubts vanish and shared his (seemingly unlimited amount of) knowledge. Having worked at an NGO that supports youth clubs and organizes youth camps (a.o. to raise HIV-awareness), this intelligent man showed us the neighborhood in which he was born and raised. While talking about issues of segregation and exclusiveness, he showed us the different regions of this slum (which would be called a “suburb” if it would have hosted white people, according to Molefi). He told us that the area of Soweto hosts around 5 million people, ranging from the least fortunate to ones that are quite well-off. In the end, my dad and I were very happy we had decided to still go on this trip, as it has brought us a new perspective and a better understanding of the environment the projects are in. (which turns out to be strongly influenced by politics, social interaction, the apartheid and international affairs).

In the evening, we (only my dad and I) visited the wonderful (modern)African restaurant Moyo (in Melrose Arch). This place, which displayed all sorts of traditional decorations, let us enjoy the most delicious specialties that the continent of Africa has to offer. Would highly recommend going here!


Looking for more tips in Jo'burg? Or curious on what we have done the last day? Please read my last post!