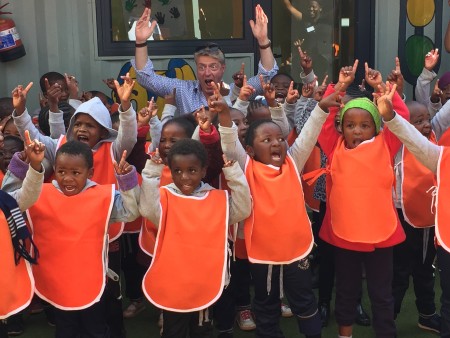 The story continues… we were welcomed by the lovely Valencia and Thirza with big hugs and freshly baked cookies and scones. Furthermore, the colorful center’s loving identity was expressed in another wonderful way as well: the children of the ECD-center had practiced many songs and dances for us. Even with the strongest will, you could not resist jumping and dancing with these children, as the smiles on their faces make your heart melt. Consequently, we were all jumping bananas and hugging teddy bears in the end, creating memories impossible to forget.

Next, we attended a group of mothers and their children who have been supported by Philips. These mothers, many HIV-positive, have all delivered healthy babies and were learning to play with them when we were there.

This was another heart-warming moment as the mothers were learning to support and love their babies, despite of the many problems they were facing. The session was led by one of the midwives, who was holding an enormous teddy bear while explaining what they were doing there. She told me that the target group of the sessions were mothers and their children, who had been guided through pregnancy and had delivered their (healthy) babies. The children in the group are between 0 and 5 years old, as this allows elaborate monitoring of their (and their mother’s) health and development.

Afterwards, we joined another working group of women in the health center. At the time we were there, the nurse was explaining pregnancy-related issues like breastfeeding, nutrition and planning the delivery. The (future) mothers were also asked to introduce themselves, as well as to describe their situations and what they had learnt in the program of the clinic.

Additionally, my dad and I were also given the opportunity to ask our questions:

Egbert: “What are the major challenges you are currently facing?”

Everyone: “finding work, so I can provide for my family” (This is a very big problem in the community, as about 80% is unemployed. Reasons for not being able to find work are both shortage of adequate jobs, the traveling distance to the location of work, as well as insufficient education.) Some mentioned related issues like ensuring health of their family and themselves, despite the few resources available (the nearest medical clinic is about 20 minutes by taxi, which requires money many don’t have. However, walking is not an option as safety/security is a pressing problem in this region.) Others talked about their husband that had left as well, making generation of income even more challenging.

Fleur: “What are your dreams?”

Valencia: “I have a very long list of wishes and dreams, do you have a few days?” (this was confirmed by Thirza and the other Mount Olive employees). Afterwards, she told us that her biggest wish is to ensure the flourishing of the Lehae community. Education/going to university and finding a job were also popular answers. (One woman wanted to study economics, another wanted to become an accountant, yet another a flight attendant. The profession of “social worker” was also very popular in this group, as would then be in the position to “give back” to the community.) Also, the happiness of the ones they cared about was mentioned often.

I was also asked about my dreams. Like Valencia, I answered that I have a very long list of those as well. However, my biggest dream is to help and empower others.
*Was very happy I asked this question, as the faces of the women/girls lit up as they were sharing their biggest wishes.

As you can tell, the day had so far been quite emotional. Nevertheless, the ride wasn’t over yet and it was time for the home-based visits. Two wonderful women opened their doors for us, allowing us to get a glimpse of their lives. One of them a mother who’d just been attending the session in the health clinic as well. She introduced us to her son and daughter, who had just finished their day at school and couldn’t be more excited because of all these people in their house.

Amongst other things, we asked her about how she’s managing to be pregnant, have two children and having a husband who is off to work (a part time – piece job). She explained that it is quite challenging, especially now that she has been infected (or having found out she is infected.) However, she has confidence in delivering of a healthy child as long as she takes her (ARV-)medication, eats well and exercises (which she was told in the clinic to do).
Likewise, she also has faith in the future of her children. If she could decide on what they’d become they would be doctors or police (wo)men of the future, living a comfortable life with their loved ones.

On our second home-based visit, we were welcomed by another powerful woman who had just brought her adorable twins into this world. This family got in touch with the Khaya Centre because of health problems of one of the twins. After several conversations, it became clear that the mother was in no way able to provide the means for a stomach operation, nor for the education of her other children. Having just given birth and not being able to rely on a husband who had suddenly left and blocked every way of contacting him, the income of the family was zero. Needless to say, the struggle to find (enough) food was the most prominent, so education for her oldest child was off the table.

Fortunately, the project could fund the baby’s operation, as well as powdered milk (she didn’t have enough milk for both babies), food and education for her oldest daughter. This family deeply touched me, as it was here that I discovered the Ubuntu-philosophy to be interwoven in even the least fortunate. Even though, the circumstances were far from ideal, I have seldom seen someone as grateful and happy with her loved ones. The tiny house was filled with children (both her own other ones), her mother (who had travelled for two full days to see her grandchildren for the first time) and the mother herself (with a face marked with pride and happiness).

Furthermore, the one bedroom she had, which fitted no more than its name, was shared. Not only did she share the bed with her three children, she had sacrificed ¾ of it to enable the neighboring family to sleep while their house was being renovated. In other words, they even take the Ubuntu-philosophy to bed, falling asleep looking at the KLM-poster of Norway which was hanging above it. Another memory which will be engraved in my heart forever.

Next on the agenda: lunch time! After the little children of the ECD program have finished eating they go home, leaving room for the next group of (project) beneficiaries to come: the older children. Every day, these (older) children are invited to the Khaya Centre to play games and get a proper meal. Seeing the number of children (600-900) waiting with their Tupperware-boxes, we now understood why the gigantic pots and ovens were for.
That is, besides cookies, bread and scones, the cooks do their best to create nutritious meals for the children as well.
Often these feature “pap” (mashed corn, which has many variations as well), vegetables and meat, fish or cheese. Most important is that the meals are nutritious and filling, as it might be the only thing the children eat all day, so we were told.

Because of the rich smells of the food, we were all starving after this. Lucky us, some amazing cooks had prepared a delicious lunch for us as well. This was when I discovered the richness in flavor of the South African kitchen, which makes my mouth watering when even thinking of it.

During the lunch, I had the chance to talk to another midwife and ask her about her motivation for this work. She told me that it “simply” was her passion of helping others which was driving her to do the best she can, every day. However, she did mention that the working times and conditions can be quite intense, as there are almost always long lines of women waiting to see her.

Later in the afternoon, Liesbeth, my dad and I went to the Philips office to pick up a temporary phone for my dad. Apart from the cause being far from ideal, this was a promising introduction of Orange Babies and the Philips team!

The rest of day, my dad and I spent shopping for toys (for the children at Mount Olive) and going out for dinner with my dad's colleagues. Inevitable as tourists in Johannesburg, we went to the Butcher Shop at Mandela Square.

Was our next day as eventful as the first one? Read the next post and find out!